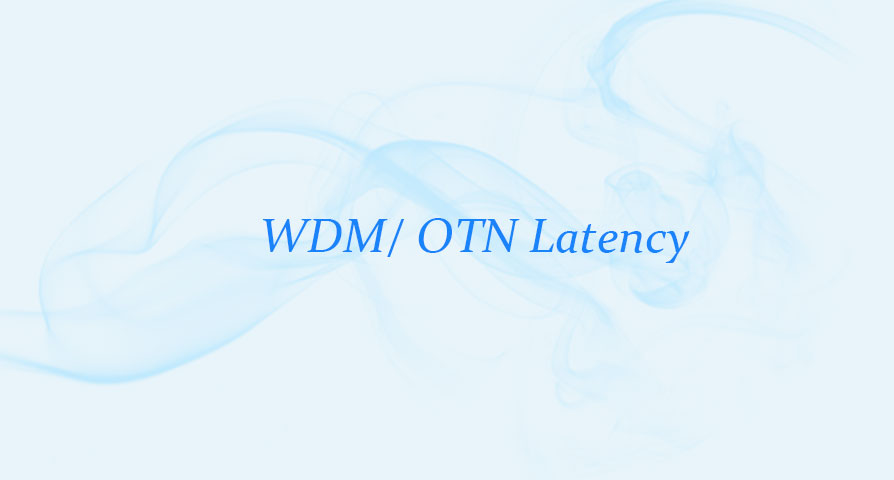 In a communications network, latency refers to the time it takes for original data to go through a series of processing operations such as encoding on a forwarding device, transmission from the transmit end over transmission links, and reception and decoding on the receive end (destination). The network latency consists of the following parts:

The WDM/OTN network is an optical transmission system that uses optical fibers as the signal transmission media. As shown in the preceding figure, transmission links and physical devices are the main factors affecting network latency in a typical WDM/OTN system.

For transmission links, the latency introduced by line fibers and dispersion compensation fibers (DCFs) needs to be considered:

For physical devices, the latency introduced by electrical-layer and optical-layer units needs to be considered:

The following table lists the latency distribution and magnitudes of WDM/OTN networks.

The simplified network architecture design reduces forwarding nodes, constructs a one-hop transmission network, and reduces the system latency. For example, the conventional ring or chain topology is optimized to a full-mesh topology during backbone network planning and design. On the metro network, WDM/OTN devices are shifted downwards to CO nodes.

Latency management is a comprehensive application based on latency measurement and data estimation of network links and nodes to provide network or service latency that can be sensed, sold, committed, and guaranteed.

E2E latency indicators are essential to verification of service level agreements (SLAs) between users and network carriers, especially to latency-sensitive services. Based on the real-time network latency monitoring data, network carriers establish dynamic network latency models and adjust the network transmission policies by predicting latency changes. Therefore, how to obtain the latency data of the transmission link is particularly important.

Traditional methods for measuring the link latency have shortcomings, such as inaccurate precision and service interruption during measurement. For example:

To provide latency-sensitive customers with latency performance priority services, ITU-T G.709 adds the latency measurement function to support online real-time monitoring of network latency. In ITU-T G.709, this function is associated with ODUk PM-layer and TCM-layer overheads. The PM and TCM overheads are latency measurement overheads and located in row 2 and column 3 of the OTU frame. Bit 7 is related to the PM layer test, bits 1 to 6 are related to the TCM layer test, and bit 8 is a reserved bit (the default value is 0). The function is classified into ODUk PM-layer test (DMp) and ODUk TCMi-layer test (DMti). The latency at different TCMi layers can be tested based on the TCMi enable status.

This latency measurement is based on ODUk overhead bytes and does not affect services. Therefore, this function provides in-service latency monitoring. The measurement precision is μs-level, which can meet most service requirements. The latency measurement results include the electrical-layer processing latency of service boards and the optical-layer transmission and processing latency of transmission fibers, OA, DCM, and OADM. To ensure the test accuracy, you can perform multiple tests and take the average value.