When the NMS Fail to Synchronize ONUs.

When an NMS synchronizes with ONUs from an OLT through the FTP, the character string length of the version information (such as the equipment ID, ONT model, ONU hardware version, ONU primary software version, ONU secondary software version) reported by some ONUs exceeds the maximum length defined in the protocol, and the reported character string does not contain any string tokenizer. As a result, the NMS fails to synchronize with the ONUs, and customers cannot manage the newly-deployed ONUs or deploy new services.

2. The NMS synchronizes with ONUs through the FTP.

3. The character string length of the version information reported by some ONUs exceeds the maximum length defined in the protocol, and the reported character string does not contain any string tokenizer. (As defined in the protocol, the maximum length of the equipment ID or ONT model is 20 bytes and that of ONU hardware version, primary software version, and secondary software version is 16 bytes.)

When the above conditions are met, the NMS fails to synchronize with the ONUs.

The following describes the possible symptoms:

1. The ONUs cannot be displayed on the NMS network topology.

2. ONU information, such as the ONU SN (GPON), LOID (EPON), and equipment ID, cannot be displayed on the NMS interface.

3. ONU information cannot be found on the OLT.

If the above symptoms occur, use the following methods to determine whether they are caused by the problem in this precaution.

If both the NMS and the OLT are in the version ranges mentioned above, proceed to the next step.

If not, the problem described in this precaution does not occur. The synchronization failure is caused by other causes.

If yes, the character string length exceeds the maximum length when the NMS parses the POD file. Therefore, the information cannot be written into the NMS database. The problem can be solved by using the suggested solutions in this precaution (see “Measures and Solutions”).

In the command output, if the type name, software version, or hardware version of a certain ONU exceeds the maximum length listed in the following table, the character string reported by the ONU does not contain any string tokenizer, which results in the problem described in this precaution. The problem can be solved by using the suggested solutions in this precaution (see “Measures and Solutions”).

Use the following method to confirm the character string: Copy the ONT model or software version information to the UltraEdit, and choose View > Display Ruler from the main menu. 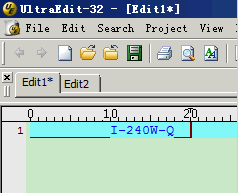 The version information reported by the ONU does not contain a string tokenizer.

The following uses the ONU software version as an example.

Different ONUs use different methods to report the ONU software version. Generally, an ONU adds a string tokenizer \0 at the end of the reported character string. In this way, the upper-layer device detects how many bytes the software version reported by the ONU contains.

The NMS synchronizes with ONUs through the SNMP instead of the FTP, but the synchronization efficiency will be reduced by about 80%.

If you need to use this solution, contact Huawei R&D engineers for confirmation in advance to prevent NMS performance from being affected. The specific methods for synchronizing with ONUs through the SNMP are as follows:

1. Back up the U2000\server\nemgr\nemgr_access\dcp\platform\v100\feature\gdm\mxu_conf_dev_feature.xml file.

2. Copy the backup file and edit it. Find <feature name=”PollOptimize” support=”1″> in the file as follows:

The values of Dev type and the specific NE types are mapped as follows.

The problem can be resolved by loading the NMS patch or the OLT patch.