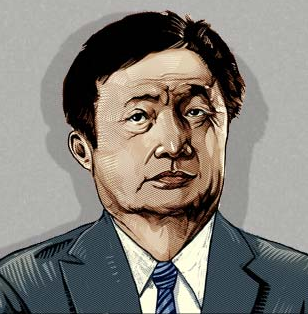 Huawei’s boss Ren Zhengfei has opened up on his succession, his reluctance to take the company public, difficulties in retaining staff, and why the Chinese firm is in the US sights.

Yet the biggest surprise in his recent interview with Chinese journalists is probably the revelation that rival John Chambers had consulted him about Cisco’s succession.

Asked about retirement and his CEO succession plans, Ren said Chambers, who turns 65 in August, “personally sought my opinion” about his own replacement.  “Although we are competitors, we still have useful exchanges,” Ren said, adding that “of course, I didn’t know who would be the best for their succession.”

He did not say when or where the discussion took place.

Ren, who turns 70 later this year, said he had no plans for retirement, citing his “friends” Maurice Greenberg, the 88-year-old ex-AIG chief, and Simon Murray, 74, the storied former head of the Hong Kong Hutchison Whampoa group, who are both still active in business.

He said Huawei’s succession problem was that “we have too many potential successors, not too few.”

Ren, who owns 1.4% of Huawei stock, says he would not allow any family member to take his place as CEO, although he was not asked about the role of his daughter, Cathy Meng, who is CFO and a board member.

The Huawei founder also gave a curious explanation as to why he won’t take the company public.

Huawei executives have said that the privately-held firm can raise all the funds it needs from cashflow and by issuing shares to employees. But Ren said that if it went public Huawei would inevitably “diversify,” and that would “destroy 20-plus years” of growth.

“If we don’t diversify, we will have no cash difficulties,” he said, forecasting that Huawei will spend up to $10 billion on R&D in the near-term to keep pace with technology change.  “[W]e are determined to not enter the capital markets and not to diversify. If our development doesn’t need too great a scale, how could cash problems emerge?”

Ren didn’t explain what he meant by diversification, but by the standards of western business, Huawei is already an extremely diverse business. Unlike its western rivals it is in every part of the fixed and mobile telecom equipment business, not to mention its flourishing enterprise and device units.

Ren acknowledged Huawei suffered from “an outflow of talent,” especially when one of China’s internet companies is prepping for an IPO. Unlike those internet firms, the size of the company meant “we can’t just incentivise a few people – we need to attract 15,000.”

He said he was “hurt” by the recent resignation of senior handset executive Colin Giles after less than a year in the post but could not hold him back (seeHuawei Handset Man Jumps to Lenovo).

Ren said he regarded the US prohibition on Huawei equipment as aimed at China, not the firm.

“The stronger China becomes the more the US will attack it.  “In fact, the US is not attacking Huawei, it’s attacking China, because the US does not want China to become strong, and its always looking for a new point to aim at.”

He also demonstrated himself a proud patriot, expressing himself in just the kind of language an ex-PLA officer might use. Asked if he had a faith, Ren said:

I have a faith, that is I have faith in our country today. We previously thought capitalist society can massively liberate productive forces, but we have discovered that as social inequalities have expanded, problems have emerged, bogging down our development.

The [Communist Party] Third Plenum is on the correct path. Previously we weren’t clear which of the big three continents – the US, EU and China – would rise first. Now we are clear – China will certainly rise first. China has recently encountered some short-term transformation problems, but over the long-term these will certainly be solved, and following that our development will be increasingly strong.